You do not have to be good.
You do not have to walk on your knees
For a hundred miles through the desert, repenting.
You only have to let the soft animal of your body
love what it loves.
Tell me about your despair, yours, and I will tell you mine.
Meanwhile the world goes on.
Meanwhile the sun and the clear pebbles of the rain
are moving across the landscapes,
over the prairies and the deep trees,
the mountains and the rivers.
Meanwhile the wild geese, high in the clean blue air,
are heading home again.
Whoever you are, no matter how lonely,
the world offers itself to your imagination,
calls to you like the wild geese, harsh and exciting —
over and over announcing your place
in the family of things.

I have this that I must do
One day: overdraw on my balance
Of air, and breaking the surface
Of water go down into the green
Darkness to search for the door
To myself in dumbness and blindness
And uproar of scared blood
At the eardrums. There are no signposts
There but bones of the dead
Conger, no light but the pale
Phosphorous, where the slow corpses
Swag. I must go down with the poor
Purse of my body and buy courage,
Paying for it with the coins of my breath.

It’s been a while. Quite a year, in fact. I’ve been learning to teach, and it turns out teaching is really hard. No matter. I’ve been posting the odd thing at somesmallcorner.co.uk, but not much. It’s a lot like unconscious babble, the mind fetching back what has happened in the world while I’ve been looking elsewhere.

One of those things has today been posted at Caught by the River. I went for a walk and met an old fella who made my heart leap. I’ve not been able to shake him. Hope that door is still open, Mike – I’ll be by at some point.

Let the day grow on you upward
through your feet,
the vegetal knuckles,

to your knees of stone,
until by evening you are a black tree;
feel, with evening,

the swifts thicken your hair,
the new moon rising out of your forehead,
and the moonlit veins of silver

running from your armpits
like rivulets under white leaves.
Sleep, as ants

cross over your eyelids.
You have never possessed anything
as deeply as this.

This is all you have owned
from the first outcry
through forever;

you can never be dispossessed. 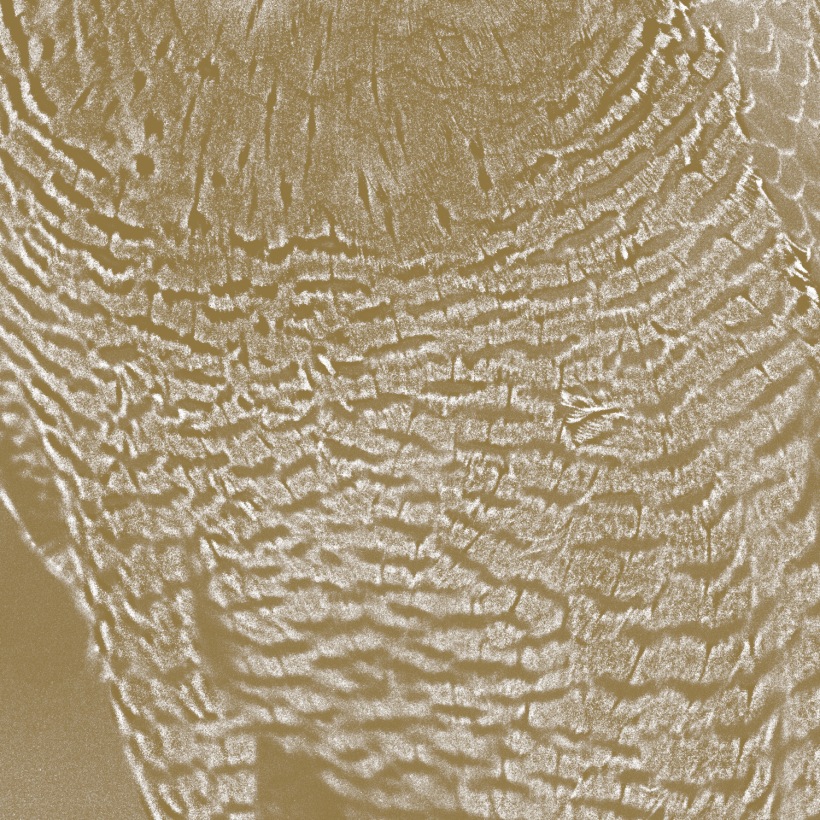 I have always longed to be a part of the outward life, to be out there at the edge of things, to let the human taint wash away in emptiness and silence – JA Baker

Lawrence English has long consorted with weather and the environment when researching and creating his delicate and intricate music – be it the tonal shifts of the seasons on albums like A Colour for Autumn, or For Varying Degrees of Winter, or the more immediate concerns of the water-based field recordings for 2005’s Limnology; but with The Peregrine he has shifted this relationship slightly and in many ways taken on so much more. For with The Peregrine, not only does English face the unenviable task of reflecting on and recreating the immersion of another person’s experience of nature, but he has do so through the extraordinary refracting lens of JA Baker’s molten prose; and this sense of being twice abstracted from the source lends a strange power to English’s sonic homage and brings to life the books’ enigmatic beauty.

In JA Baker’s own admission he ‘came late to birds’. But when he fell, he fell spectacularly. His patch was, broadly speaking, the stretch of land that lies to the east of Chelmsford in Essex, out towards the Blackwater estuary and the Dengie peninsular. It’s a landscape that mixes the ordinary – beech, oak and hornbeams woods and arable fields – and the more unusual, with its blurred outer edges a labyrinth of waterways, marshland and tidal mudflats. For a decade Baker obsessively stalked the peregrine across this landscape (although he followed a number of these birds, it seems fair to use the definite article here, as for Baker the bird took on something of a Platonic heft, as though these birds were of another realm). And for once the adjective obsessive isn’t overplayed: Baker’s method was to become a function of the landscape, to immerse himself so totally that the hunting falcon would incorporate him into its visual memory. As Baker puts it: ‘The peregine sees and remembers patterns we do not know exist: the neat squares of orchard and woodland, the endlessly varying quadrilateral shapes of fields. He finds his way across the land by a succession of remembered symmetries.’ It is believed that peregrines have a total memory map of their hunting grounds and can recognise the slightest changes. Baker wanted to become part of this map.

This gradual process of invisibility and immersion is also evident in Baker’s extraordinary prose. In many ways he is barely present in the text at all, instead functioning as a kind of amanuensis for the Emersonian concept of the ‘transparent eyeball’ in which the self or the ego is subsumed in the vortex of the natural world. He seems more conduit than writer, transmuting raw observance into liquid forms that coalesce before the eyes; though of course this process is illusory as in truth Baker is a master craftsman, with a vast hoard of descriptive tools and metaphors. He is like a less-neurotic Manley-Hopkins, or probably more accurately a less-earnest Ted Hughes – he has both of these writers’ ability to invoke the swirling intricacies of place and our apprehension of it. His dexterity is alchemical.

English’s approach to Baker’s text is quite a literal one in the first instance, in that he takes a section (for the first track ‘This Hunting Life’), or a specific diary entry (entries which are given only date headings in the book, and which English has titled using a theme or a particular detail relevant to that entry) and uses these as a basis for his sound explorations. The tracks then work with textual detail and flourish and broaden, using broad swirling drones and deep wells of bass to recreate the environmental conditions Baker experienced and so preternaturally transcribed. Obviously, by design, these recreations are impressionistic and idiosyncratic, as English is working with an already meditated set of impressions, and yet the remarkable thing is the way in which, sonically, in using a fairly narrow range of sound and instrumentation, the individual tracks do manage to so ably soundtrack the prose on the page.

For me, English’s greatest achievement on The Peregrine is the way in which he has caught the rawness of the air, and the sheer brutal reality of the peregrine’s meaning within the landscape and the environment. It must be said that for all its relatively small size, the domination of the peregrine is near total – the mere ghost of its presence, soaring a mile in the air, is enough to effect behavioural changes in the wildlife for miles around. Smaller birds dive for the thick cover of hawthorn hedges, cockerels throw their harsh shrieking into the sky, rabbits and hares escape to their burrows and the likes of starlings, wood pigeons, plovers and lapwings will take to the skies in their thousands, desperately trying to outflank our gain height on the hunting bird. With this is mind, English’s huge scurfy drones act as something like an elemental theatre, within which the smaller increment details highlight individual phenomena.

A track like ‘Dead Oak’ (a favourite haunt of the peregrines), for instance, and the track it bleeds into, ‘Frost’s Bitter Grip’, both use this arena-like technique, and the roar of the surface drones do have the feel of the upper air, and the granular detail becomes like the murmarations of desperate starling or lapwing flocks, banking and swarming in the viciously cold winter wind. ‘Frost’s Bitter Grip’ and ‘Grey Lunar Sea’ also manage to portray, using a mixture of high thin metallic and broader cloud-like drones (not dissimilar in texture to some of the sounds Basinki captures in the warping tape recordings of the Disintegration Loops), the shattering cold of the winter of 1962/3, during which countless birds died and significant parts of Essex’s North Sea coast froze for months on end.

The latter stages of the album follow the cyclical ascent away from the bitter winter into the warmer heights of spring. ‘The Roar Ceasing’ is the beginnings of this great thaw, ‘a day made absolute, the sun unflawed,’ and English evokes the subtle tonal changes by shifting the drones to a brighter register, using spare buried piano motifs to replicate the movement and release of all that trapped water. The closing track ‘And He Sleeps’ follows the last entry in Baker’s diary and details his last meeting with the peregrine before it migrates. In the text, Baker uses the cover of the sea wall to get close to the peregrine, as close as he has been throughout his period of pursuit (enslavement?), and eventually he comes within four meters, surprising the bird, which does not fly but fixes Baker with a stare before finally falling asleep. It is a moment loaded with significance as it marks a moment of acceptance, an acceptance which Baker had been seeking all along, and also a kind of mourning – a mourning that the pursuit was over (you sense the ‘and he sleeps’ applies as much to Baker as to the bird) but also something more expansive as Baker believed he was witnessing the extinction of this species in the British Isles. English’s fibrous, crying drones take on a new level of significance against this backdrop but in the familiar recourse to the same roaring elemental nature of the sound, instead of resignation, there is a note of defiance: with hindsight, we know that the peregrine has survived the massive downturn in its population and is back in its old haunts, the ancient eyries roosted once again.

There is a danger that with such a straight up homage to another work of art that the devotee could become paralysed by reverence and simply deliver a polite glancing blow that in fact fails to revere at all. I don’t think this accusation can be levelled at Lawrence English’s The Peregrine. Instead he’s created a piece of sonic theatre that doesn’t overtly romanticise Baker’s undertaking, and doesn’t shy away from the facts of the cold horror of  the peregrine’s domination of its environment or the harshness of the conditions of life. The record also recognises the silences and quiet hollows of Baker’s mythic landscape and his place within it and gives them breath. In the end, the music is subtle and powerful enough to be able to stand alongside the original text.