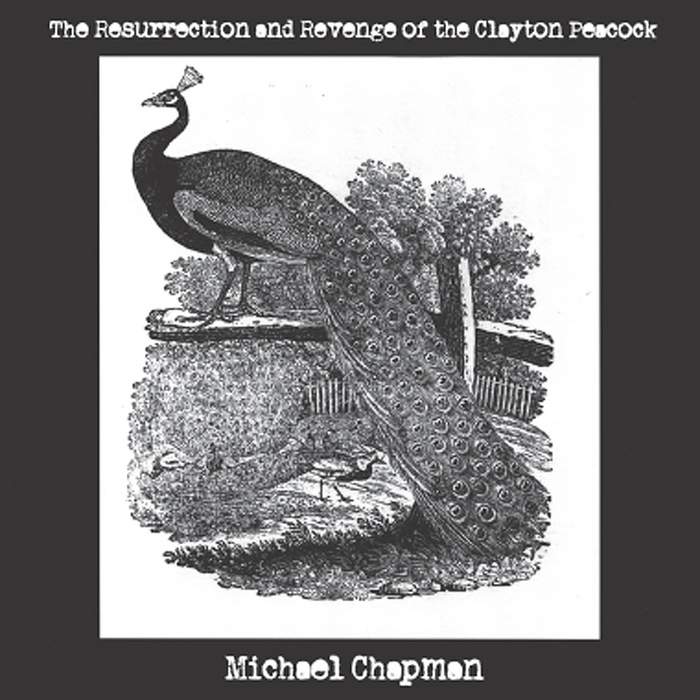 It was at a Jack Rose tribute gig in Philadelphia that the idea for this album was first mooted – Ecstatic Peace approached Chapman backstage and asked if he would record a limited print run improvised album for them. He agreed, and The Resurrection and Revenge of the Clayton Peacock is the result – two tracks, a running time of 38 minutes, and a sonic adventure that comes from the far side of the experimental guitar underground.

The Resurrection and Revenge of the Clayton Peacock (a reference to the track ‘The Death of the Clayton Peacock’ on John Fahey’s The Transfiguration of Blind Joe Death) is, unbelievably, Chapman’s first improv album to which the legitimate response seems to be, “where has this come from?” Chapman’s life and work, despite its scope of influence and its always oddly marginalised status, has been undergoing something of a critical reappraisal of late with the re-releases of some of his classic early albums and vocal support from underground figures such as the aforementioned and now deceased Jack Rose, Tom Carter and Thurston Moore; but still, none of that really prepares you for such a strange and other sounding album.

Inevitably, when confronted with a rupture of this nature, there’s an impulse towards investigation and speculation: to determine a piece’s provenance or examine the motivation behind the creation; to go looking in the artist’s catalogue for clues, or even delving into referenced source material – in this case the suppressed howl of the referenced Fahey original. Chapman’s work to date has covered a range of styles, but in the main he’s tended to concentrate on limpid finger-picked ragtime-inflected traditionals and originals, and more straight ahead folk rock and all-out rock. You might advance a theory that this improv space is the sound of the interstices between these forms, or is something like the sonic outfall of precisely these years of working with form.

And the two tracks that make up …Peacock are all about this notion of an improv space, creating a cavernous theatre into which Chapman threads tendrils of piped silver, or pours billowing contrails of feedback, the latter stages of which indelibly mark themselves out as bird calls, bird shrieks. All the while the inner ear searches for purchase, for familiar Chapman tropes and landmarks. And the truth is, they simply aren’t there. What you’re left with is a feeling that you’ve borne witness to a rite, an invocation.

The assumption is that Chapman must have been experimenting privately with this kind of sound for a number of years, or in the very least had been comfortable with the very idea of improvising in such a minimal yet abandoned fashion – the recourse to singing bowls and mbira in the second track (the ‘Revenge’) were presumably results of previous experiments. Listening to this in the dead of night, I had intimations of the occult, of a kind of spectral channelling – of what I’m not sure. But wilder flights led me to wonder if this was a comment on the end of things, the wasteland at the end of the tradition, or maybe the primal mulch from which it grew. It also felt as if it might be a glimpse into a musician’s fount or sacred space, the aural equivalent of peripheral vision, glimpses of sounds that may have drifted around Chapman for years, waiting exactly for this moment of channelling.

There’s an aside to all this and it’s around the usual rhetoric of age and creativity. Chapman has released upwards of 35 albums since his debut in 1969, which is a remarkable figure in itself; but to have suddenly found this new direction so late in the day, and to have inhabited it with such dexterity and force gives the game a whole different arc. If it wasn’t already so explicitly linked to Fahey you’d wonder if that most haunted and most haunting of figures had found some way of re-incarnating his damn(ed) self. The Resurrection and Revenge of the Clayton Peacock is an astounding bell peal, you should seek it out, now